No Drop ride leaders leave no cyclist behind

Looking for ways to grow your cycling club and improve the experience for everyone concerned?

Start at the bottom and commit to rolling out No Drop ride groups, the key word being “commit.”

The Houston-based Northwest Cycling Club thrives on many levels, but one of the best things it does may be the manner in which it supports the least experienced among its riders. Almost sounds biblical, doesn’t it?

When club members meet on Saturday mornings at Zube Park in northwest Harris County, they break into pace groups. New riders are asked to join the No Drop (ND) group, which allow them to get familiar with the local roads and routes, develop better cycling skills, and ride with the peace of mind that comes with knowing they won’t be left behind.

The club has two experienced ND ride leaders, Wayne Freeman and Sam Wu, who week in, week out are committed to nurturing new riders. Wayne leads out a group on a route varying from 20 to 35 miles, depending on the experience level of those who show up on any given Saturday. The pace is typically 12 to 14 mph. 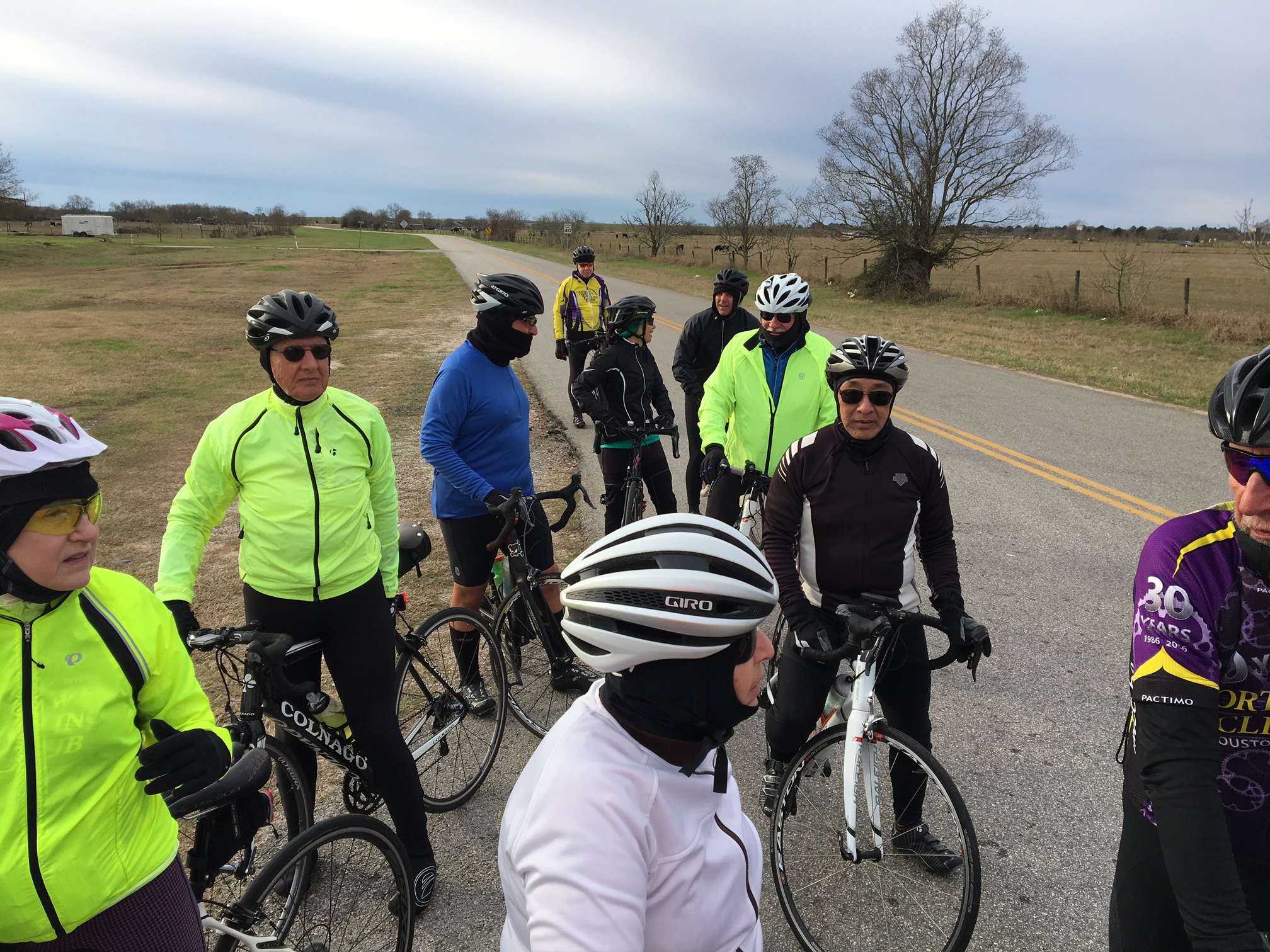 Sam Wu, the man in black, regroups his No Drop group.

Sam takes out a slightly more savvy pack, those who have “graduated” from Wayne’s ND group, on a 40-mile loop at a slightly faster, 14- to 16-mph pace. This bunch, having grown comfortable with one another, is highly social. 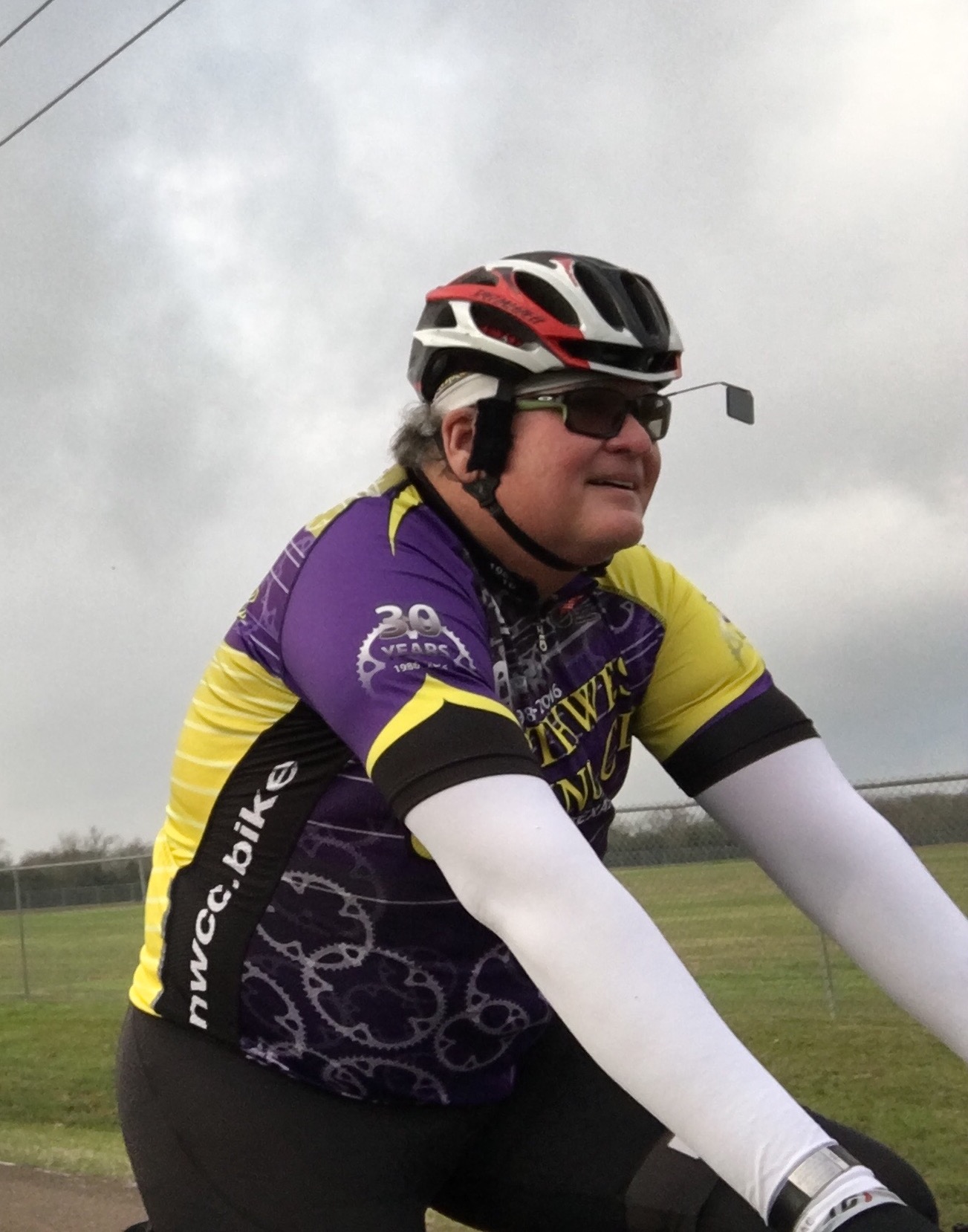 Wayne Freeman is the best friend a new rider can have.

Whatever pack they choose, newbies are usually ready to roll.

“By the time they have gotten the courage up to come out to a new setting to ride with people they do not know in an area they know nothing about they have already gotten beyond nerves and are excited to ride in the group,” says Wayne Freeman.

We spoke with Sam and Wayne about their roles in facilitating Northwest Cycling Club’s highly successful ND riding groups.

Wheel Brothers: What does No Drop mean to you?

Sam Wu: If you are able to ride, you will not be left behind. We will help with changing tires if you have a flat and help with minor repairs if needed.

Wayne Freeman:  Security. Most new ND riders have never ridden on the routes we take and riding with us they only have to follow.  Knowing that if they have some kind of problem they will not be left on the side of the road takes the worry out of cycling.

Sam: As a longtime club member, I saw a need and since I was a regular club rider decided that it would be a way of giving back to the club.

Wayne:  As a club member for many years I have always ridden with the ND group. When the regular leaders could not attend I would volunteer to fill in.  Sam asked me to come on board when the previous leader moved on to other club duties.

Sam: It is a major commitment in that you need to be there on a weekly basis, although there are times when I cannot due to work or personal commitments.  A sacrifice? Not really.  I see it as paying it forward to the cycling community. There are no other clubs that I know of that offer this type of security to new riders.

Wayne:  No, I actually enjoy the interaction with the newbies.  And it is understood that on A&M home game Saturdays I will probably not be there.

Sam: The routes have been developed over the years, based on traffic and area development.  They have evolved to include routes that are being used by other club members that ride on other days.  Many of our ND riders are regulars and we try and change the routes to alleviate the boredom of riding the same routes.

Sam: Most newcomers are a combination of the two.  Usually they hear about us from friends or family members who ride. We also have a reputation of being open and welcoming to newcomers.  We want to encourage riders of all skill levels to have a good cycling experience.

Wayne:  Some are a little nervous but most are not. All of the information on our website usually has prepared them for what is to come on the ride.

Sam: Most of our new riders are afraid of keeping up and getting lost.  As new riders, most of them are not familiar with their speed and are usually casual neighborhood riders who want to expand their cycling knowledge and skills.  We also get experienced cyclists who are new to Houston and not familiar with the area.  We encourage them to start out with a ND group.

Wayne: Yes, I am sure of  all of those thoughts run through their heads. That is why we try to put newbies at ease with our short pre-ride dialogue. I always ask for a show of hands from those new to the group.  Knowing who is new also helps others in the group know who to give a little extra encouragement.

Sam: For the most part they can.  On occasion we will have a new rider who is very new to the sport and has only been riding in their neighborhood. That is why we have multiple stops to regroup on our 20- to 25-mile group.  Sometimes gentle suggestions are made to that rider to ride during the week to help build up  speed and endurance.  We also have regular riders that can maintain a higher speed/endurance, but enjoy the slower speeds and enjoy helping new riders who may not be ready to keep up.

Wayne:  Yes, most can.  Remember, they have sought us out and already have read about the group on the website so rarely are they unable to keep up.   Also, regrouping at various spots along the way allows us to interact with one another.

Sam: After the first few miles on a ride, it will become clear that someone is unable to keep up.  And often the cyclist becomes aware of their limitations.  They will often start asking questions of the ND leader about how they can increase their speed or their endurance. Sometimes it is necessary to have the rider back track to the park when it is clear that they cannot keep up. This happens very rarely! No new rider is ever left on their own. They are also given suggestions on where to ride to build up their speed and endurance and encouraged to come back and ride with NWCC.

Wayne: It varies from time to time but usually someone will volunteer to ride with them at a slower pace or turn back with them to Zube. We will not leave anyone behind.  It is not really hard to hit the 12 mph level with a good road bike. I encourage those who cannot keep up the pace to continue to practice on their own and come back to ride with us when they have improved.

Sam: There is a lot of opportunity for both.  Many of the riders that come to the ND groups have heard of us and often have a specific cycling goal in mind.  They have never ridden in group rides before.  Therefore, as a ND Leader it is our responsibility to help the new rider learn proper ride etiquette and laws of cycling.  As well as encouraging them to stretch their limits.  As a club, NWCC also offers traffic skills classes that we encourage everyone to take, experienced and new cyclists alike.

Wayne:  I usually set a 13- to 14-mph pace.  Being in the front you can’t give much advice so usually after our long break at the convenience store I let other regulars lead the group on the trip back and I fall back and watch the newbies.  If I see things they need help with I will first ask if they mind if I give them some advice and almost always they say yes.  Then I will talk their heads off all the way back.  The most common advice is how to use all your gears and shifting.

Sam: The reasons vary for moving up.  Most of the time it is merely the fact of getting comfortable riding in a group.  Sometimes, they are training for a specific distance and it is a natural progression to move up.  The longer the route, fewer stops are made thus giving the riders the opportunity to build up their endurance and speed.  Sometimes they want to be able to ride with more experienced cycling friends.

Wayne:   Speed is the most common reason.  They have gotten faster and want to go to the 14- to 16-mph ND group Sam leads.

Sam: Absolutely, quite often!  We all tend to stay where we are comfortable, and the ND groups are very social groups.  But, as a club we want all of our cyclists to grow in the sport and work toward individual goals.  The ND groups are only the first steps toward reaching the various goals that a cyclist may have.

Wayne: No, never.  Most of my regulars enjoy the casual pace and the social interaction our group provides.

Sam: Many people ride ND on any given Saturday because of time constraints, and the social aspect of the group.  Sometimes, riders will arrive at the park and find that they have a minor mechanical problem with their bike that will not allow them to ride at a higher speed or they want a recovery ride at a slower speed.  Sometime they have brought a friend that they want to introduce to the sport and want to ride along with them and offer encouragement.

Wayne:  Yes, it is not uncommon for someone who regularly rides 40 miles to join my group and do the short 20-mile route for just that reason.

Northwest Cycling Club, based in Houston, is a four-time USA Cycling Club of the Year, earning the honor in 2005, 2012, 2013 and 2014. Club members ride every Saturday morning, rain or shine. To learn more, visit NWCC.bike or like the club on Facebook.